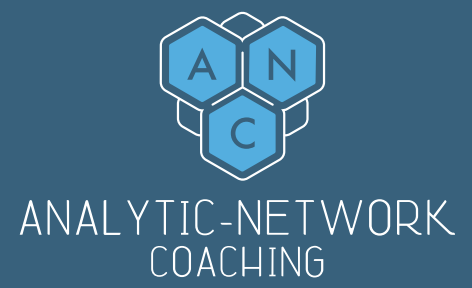 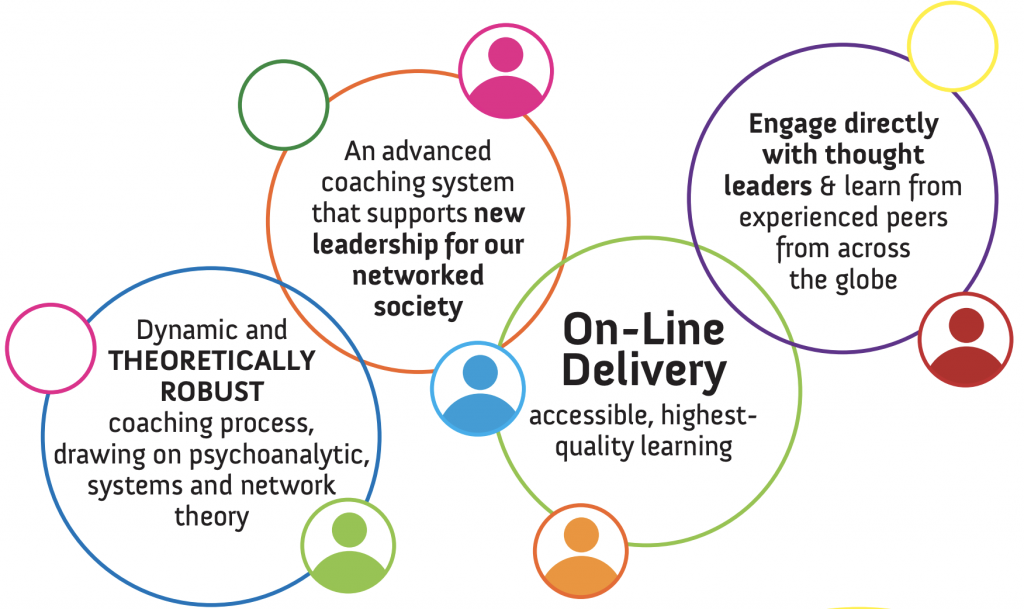 This training accredits you to become a

and certifies you to: 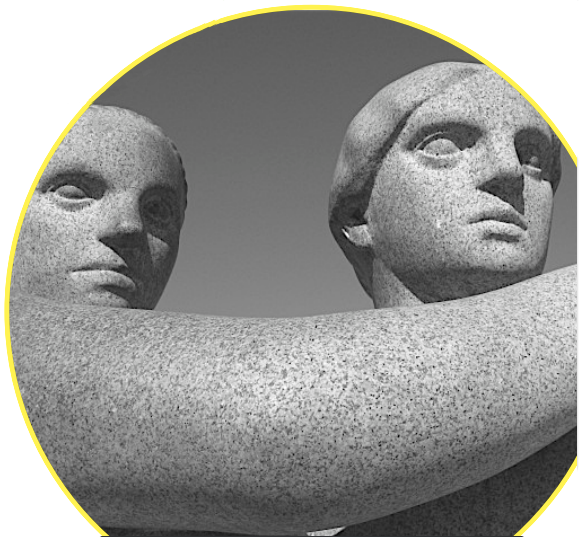 Analytic-Network Coaching (A-N coaching) is a system that helps clients to develop their personal, authentic leadership approach and strategically influence the networks in which they work, to create positive transformational change. It is not a prescriptive coaching formula, but a process developed by Dr. Simon Western, in which coaches work systematically and adaptively through five “frames” to help their clients to discover deep personal insights, identify and strive for desired change, develop connectedness and understand how to deliver individual and organisational transformation.

This training programme is for experienced coaches to learn and master the A-N five frame coaching system. 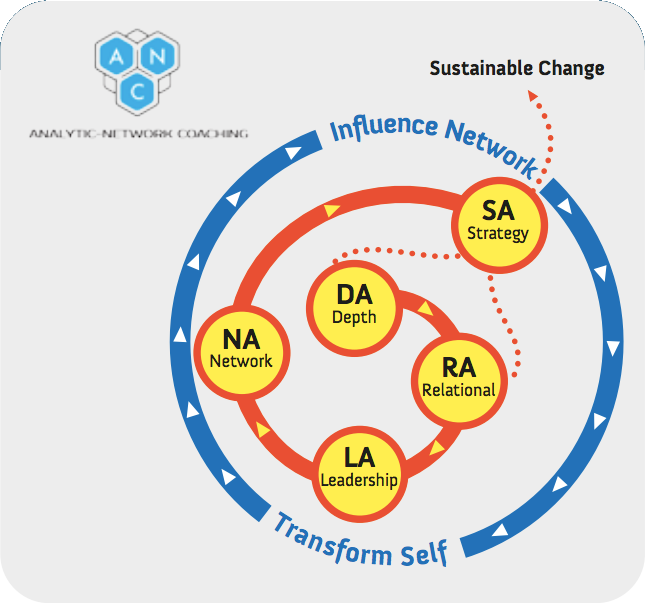 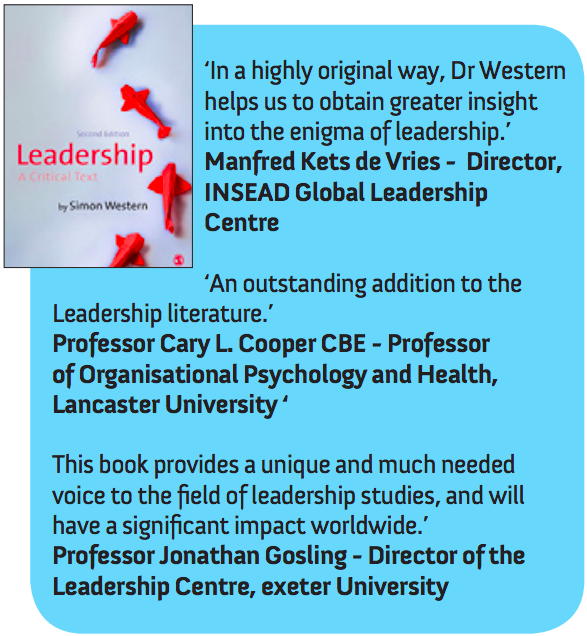 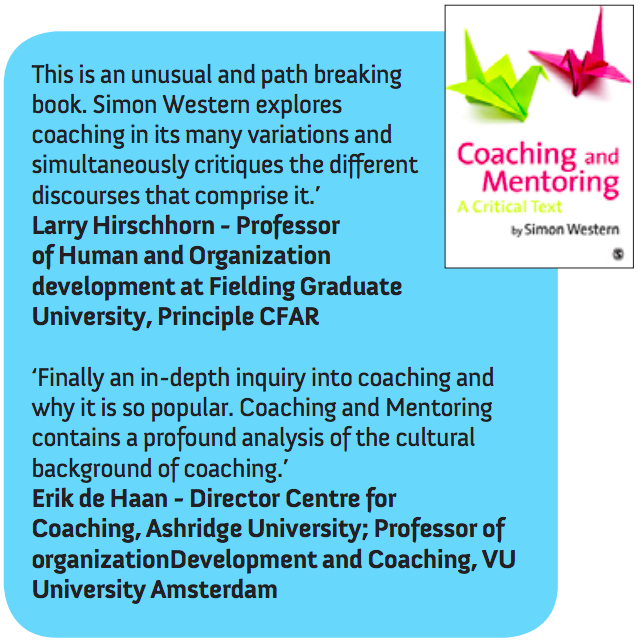 Today we live and work in a networked society, a globalised and connected world. In the workplace, the machine metaphor that dominated the 20th century is no-longer fit for purpose. It is replaced in the 21st century by the metaphor of the eco-system, representing our inter-dependent, networked and fast changing workplaces. Large and small organisations are realising that new forms of leadership are required to influence the eco-systems in which we work; eco-systems made up of technology, machines, architecture, people and nature. ‘ Eco-leadership’ captured in Simon’s book Leadership – A Critical Text (Western, 2013) describes the new form of ethical and practical leadership required for our times, and is recognised by scholars and practitioners internationally.

In his coaching and consulting work with CEOs and senior leaders in global businesses and large public sector organisations, Simon found that there was both, recognition of and a desire for change, but very little practical help to support it. This prompted him to spend five years researching and practicing coaching methods to refine how to develop leaders to think and act in authentic and networked ways. This research can be found in Coaching and Mentoring – A Critical Text (Western, 2012), which defines the first meta-theory of coaching, and applies coaching to the challenges of today’s networked society.

Through his acclaimed theoretical work on coaching and leadership, Simon has produced the A-N Five Frame coaching system, that supports the development of Eco-leadership.

Put simply it is coaching new leaders for new times.

What you get from this course

During Certification you will:

• Discover deep personal insights, and develop your advanced coaching skills
• Learn how to coach leaders to think strategically and develop sustainable strategies for change
• Be able to offer leaders new conceptual frameworks, including networked strategy
• Maximise your clients’ capacity to develop rich relationships and connectedness, and positively influence their networks
• Understand how to support individual and organisational transformation
• Learn how to support leaders to work ethically and with emancipatory aims 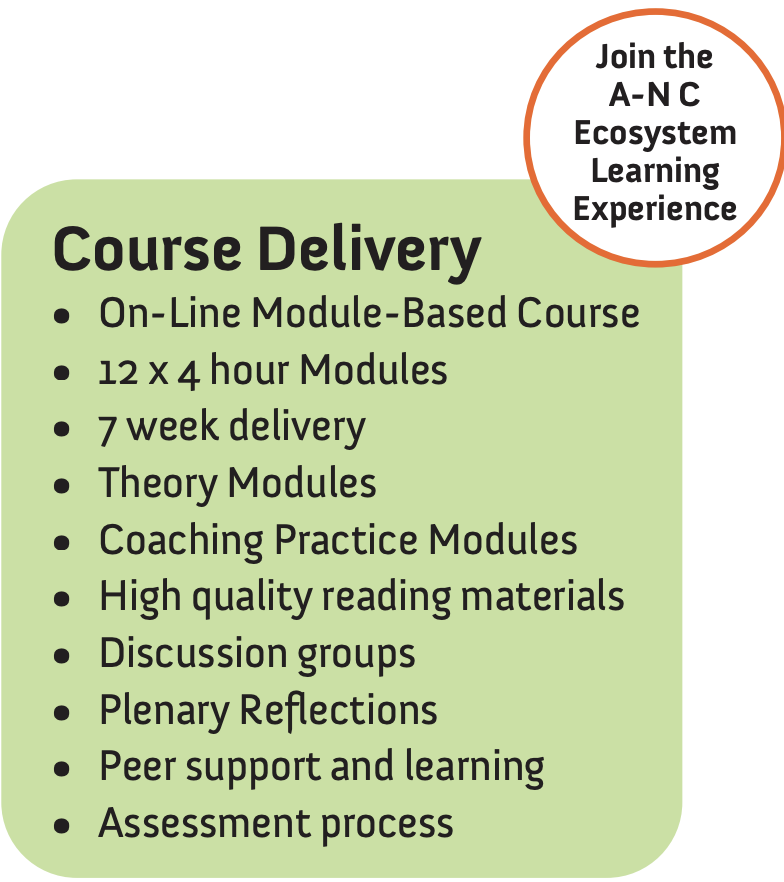 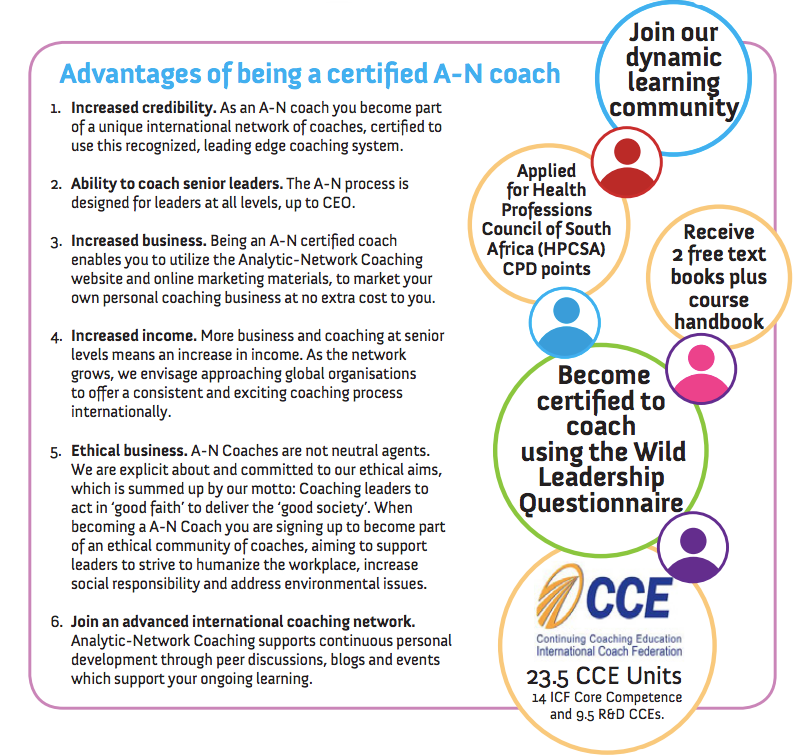 ‘Simon Western has coached both teams and individuals at HSBC. His coaching enables individuals and groups to think about their personal purpose and centre their authentic leadership effectively and consistently in the networks that make up their personal and professional lives. His unique perspective helps individuals to achieve harmony between different aspects of life, and thus authenticity.’
Christopher Yates – Global Head of OD, HSBC Bank

‘Coaching with Simon has enabled me to connect my personal, leadership and organisational issues in a profound way and to make major leaps of understanding…’
Dr Lynne Sedgmore, CBE, CEO – UK National Centre for Excellence in Leadership, Education Sector 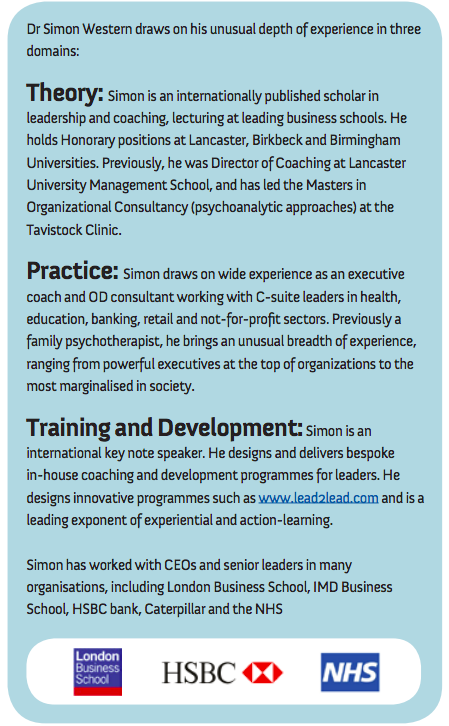 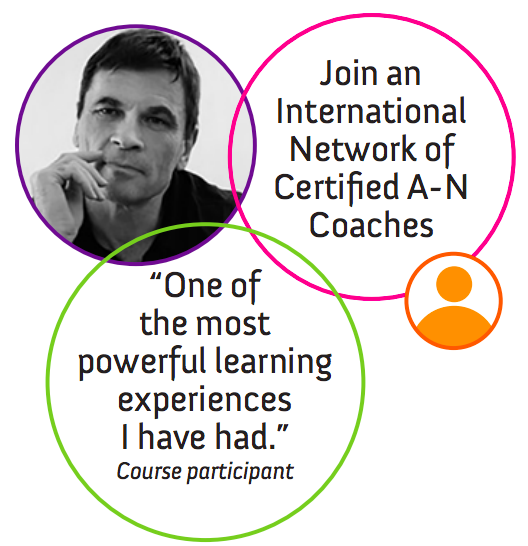 starting from AUD $3,500 for the live interactive twelve four-hour sessions

Please note this is in Melbourne, Australia time.  The time listed below is set to calculate the first start time depending on the time zone of your computer.  The first session will start at:

Starting from AUD $3,500 for the twelve four-hour sessions 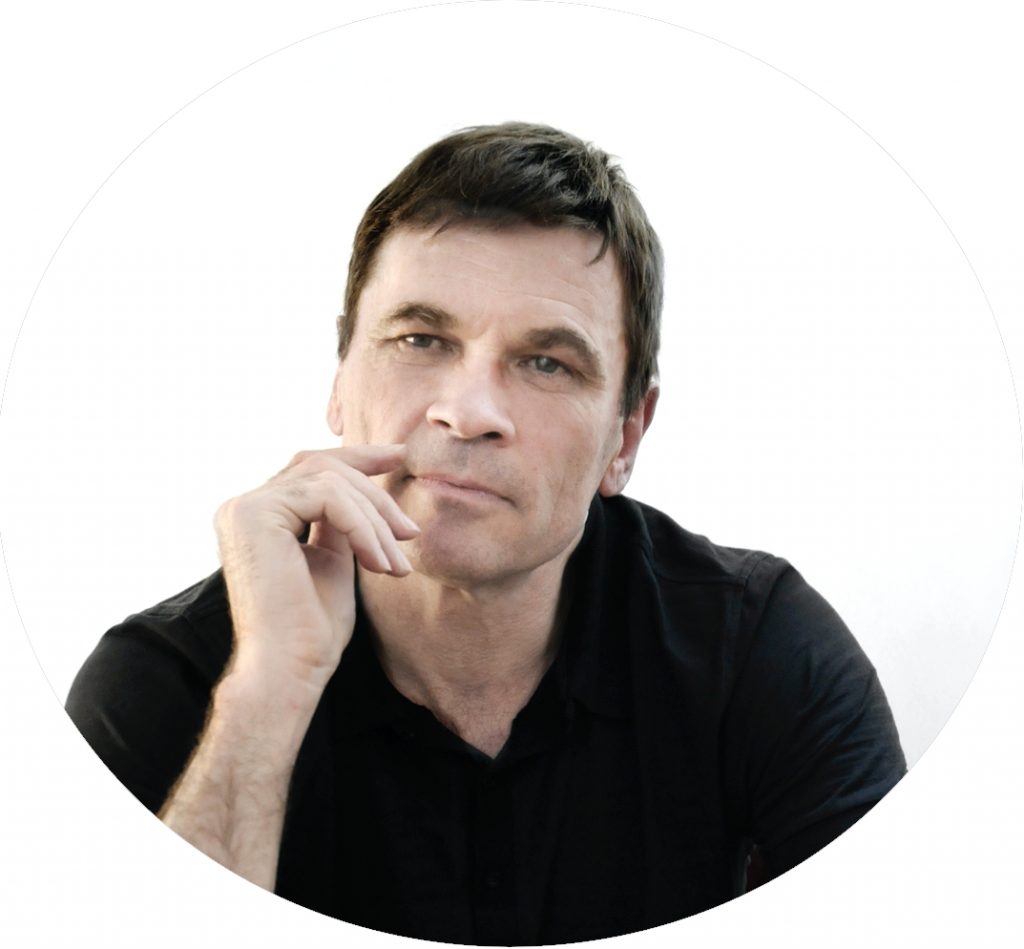 Simon is an internationally recognized thought leader and author in the field of leadership, coaching and organizational culture. His theory and practice of Eco-Leadership is taught at business schools and influences leaders across the globe. His message is clear ‘organizations are ecosystems within ecosystems’ and this radically changes how we work and live. Simon’s Eco-Leadership theory offers a framework for leaders to navigate a path working with these ecosystems made up from technology, nature and people.

Simon is the founder/CEO of Analytic-Network Coaching Ltd. A-Nc has over 300 registered coaches trained to deliver new forms of distributed leadership for today’s Network Society. He is Previously a family psychotherapist, he is a highly gifted communicator, building trust and confidence; he coaches and consults to CEO’s and leadership teams. He founded Edgy Ideas Podcast in 2020 to explore ‘how to live a good life and create a good society’.