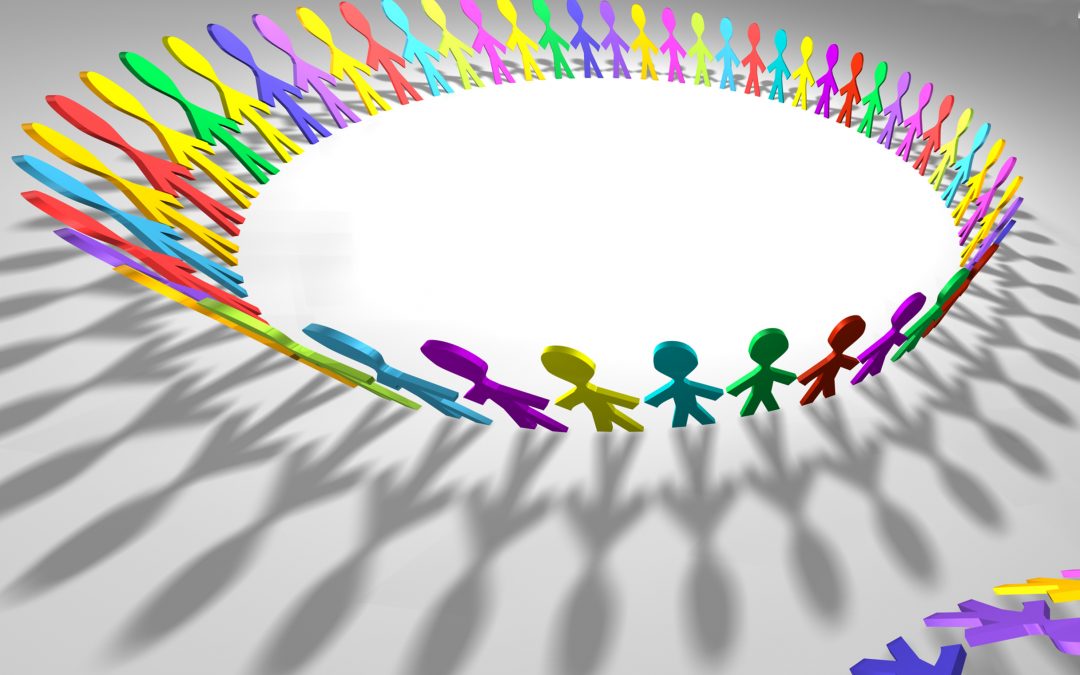 The 2019 NIODA Group Relations Conference aims to explore the idea of the community at work, especially those systems within the community that affect or are affected by identity and gender, and how these are affected by authority relations see Group Relations Working Conference.  This is the first of a series of blog mini-articles on concepts related to the conference.

The idea of community is different for different people. For many it is about the broader social level, one might say the domain of community. This has resonance for those who think of the communities where they grew up; the local people, businesses, schools and sporting facilities. Community is understood as a social group who share a common location, government, interests and history. Following the illuminating concept of institution-in-the-mind put forward by David Armstrong, we might say that we each have a
community-in-the-mind: an idea of community that we act within. Even an isolated family or individual may have a community-in-the-mind that affects their thoughts, feelings and behaviours. The links and breaks between the local community and the workplace are perhaps most evident in rural or country areas where locals are most likely both neighbours and work associates; acquaintances and tradespeople. Roles between local community members require clear articulation as is evidenced by many a local doctor, teacher or council member where people mix in both social and work environments.

Yet now, in the twenty-first century, often people interact more with others at a distance through social media, the internet, phones and travel than they may interact with local neighbours. Communities may be distanced and virtual. Importantly, much of the current citizen’s time is spent at work and identity is forged in one’s professional work, industry or trade. So, we can understand that the workplace itself contains a community-in-the-mind for its staff members. This idea is supported through the attempts of workplace leaders to foster common values and ideals in organizational members. The idea of a community lies beneath workplace culture, whether it be close-knit, under-bound, industrious, rewarding or troubled.

How can we understand community at work?

A work organization contains many systems. The main or primary purpose of the organization gives rise to tasks and these are managed through a task system. This is the system that produces commodities or services. But those who study organizations point to other systems that are present and have an influence on that task system. For example, there is the sentient system of emotional links between people; systems of interpersonal links and friendships; likes and hostilities. There is the political system of varying power relations – some authorised, some informal. There are social systems of hierarchies derived from external society – these may be linked to gender, religious affiliation, ethnicity, skin colour, sexual preference or even more transient differences such as smokers and non-smokers; punks and hippies. Some social/work hierarchies may derive from the internal history of the organisation and the types of roles undertaken by different people, often but not always linked to the task system. For example, secretaries and managers; surgeons and interns or stokers and drivers. Other social systems are linked to informal roles, such as the ‘nurturer’, the ‘bully’, the ‘flirt’ the ‘boss’s favourite’ or the ‘spy’ – however pejorative such titles suggest. At work we are invited, both consciously and unconsciously to take up roles in many of these systems and we can find ourselves at times ‘pulled in’ to enact roles that we would rather not.

All these task, political and social systems interact in many subtle and unconscious ways. Together they are present in the community at work; the community both contains and supports these systems so it is best that we develop collaborative and creative work communities in order to ameliorate the problems of destructive hierarchies and promote more resilient, productive and fulfilling work lives. It is critical that we discover the largely
unconscious community system in our workplaces and how we each take up our roles within this community.

We are all equal in our roles as members of the community, however that is conceived. No matter the hierarchy in the task, political or social systems, a community is of equals and that has an energy of its own. What this means about leadership and authority for task; how authority and power are distributed; and how differences are managed in any workplace community, given this underlying equality, is worth discovering.